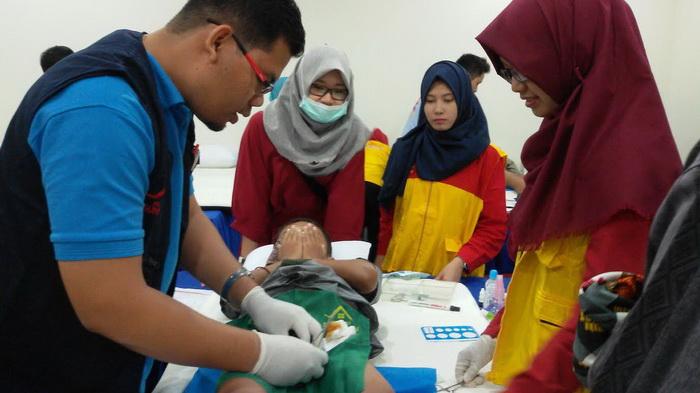 The atmosphere is crowded in the banking service room, teller and customer service building BPD Kaltim or Bankaltim, Jalan Jenderal Sudirman, Samarinda, Sunday (9/10/2016), at 08.00 to 17.00 Wita. The mothers and fathers bring their children in line in the corridor room to join mass circumcision welcomed the 51st anniversary of the Regional Development Bank (BPD) of East Kalimantan.

The event was attended by Director of Marketing BPD East Kalimantan, Ismunandar Azis; Director of Compliance, Andi Hadi Wijaya; Leader of the Corporate Secretariat, Abdul Haris Sahilin; And the Compliance Division Leader who is also the Coordinator of Social Services, Mariani.

The main office of BPD Kaltim office on the 1st floor is full of children participating in circumcision accompanied by their parents and relatives who sit in the provided seats. To reduce the tension of children, the committee provides a large screen that plays cartoons.

Corporate Secretariat Leader Abdul Haris Sahilin accompanied by Social Activity Coordinator Mariani expressed, the theme of the 51st anniversary of BPD Kaltim Penetrating the Limits of Building the Country is expected to animate the activities of BPD Kaltim. Social action mass circumcision is done since 2015. Up to now have more than 100 children circumcised. From January to September, Bankaltim actually has performed circumcision to 10 children, and the number of circumcised 153 children with children aged up to 13 years.

"Doing good deeds can be done anytime, not only in the framework of birthday," he said. Haris continued, BPD Kaltim help children from poor parents. For this activity Bankaltim cooperate with Rumah Khitanan Samarinda at Jalan Kadrie Oening.

"Today there are children up to 13 years old new circumcised hope hope among the 200 people who have circumcised, we will have a loyal customer because our circumcision participants open the account of each child get balance Rp 200.000 We also give souvenir sarong Etc. That's how life should be balanced by sharing with others whenever it's time, "he said.

Imay, a resident of Jalan Sudirman Pasar Pagi Area brought a child to follow mass circumcision. "I know the info from a friend reviewed last month, hopefully Bankaltim program will continue to run if next year adds the participants," he said. Similarly, Yeni, a resident of Jalan Damanhuri who brought a child to circumcise. "Hopefully the circumcised participants are getting more and more," he hoped. (*)