71 Years of Indonesia Independent Day, Bankaltim Has Got 1.052 Branch Offices 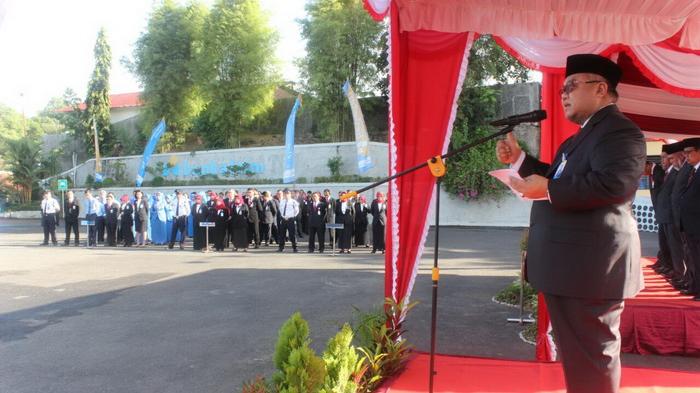 Independence day is a special moment. Today can be a moment to uphold the value of unity and cohesiveness that become a whistle spirit BPD Kaltim or Bankaltim in order to continue to work.

It was shown at the ceremony August 17 in the parking lot building BPD Kaltim, Wednesday (17/08/2016). Acting as Inspector of Ceremony (Irup), President Director of BPD Kaltim Zainuddin Fanani reminded that for Bankaltim able to face all problems. BPD Kaltim has become a big bank. It is now available in Kaltim and Kaltara areas with a total of 1,052 office and service networks, "he said.

He explained that 1,052 networks consist of 1 head office; 17 branch offices; 87 sub branches; 83 cash offices; 42 Payment Point; 14 Mobile Banking; 314 ATM machines; 468 EDC Machine; And 26 office chaneling. "With the spread of the office network and the service shows that BPD Kaltim is a big bank." As a big bank, we have to be confident, to be optimistic, that we can overcome all the problems facing us, "he said.

Zainuddin reminded, to maintain cohesiveness, employees are asked each other synergy. Because if one alone there is selfish or less concerned with fellow employees can affect the performance of Bankaltim as a whole. "The depletion of the value of unity and the lack of care of fellow employees will hamper the end of the declining performance.Let by the spirit of serving the common interest and building our nation must be able to compete on an international scale," he said.

President Director of BPD Kaltim also applauds the enthusiasm and spirit of employees at BPD Kaltim on the border of East Kalimantan and Long Bagun, Sebatik. '' I understand and have visited how minimal the infrastructure there but Bankaltim employees remain enthusiastic. At the border and remote areas there is no bank that serves the community other than BPD Bankaltim. We serve in remote areas even threats from the community, if not serve, they will pull out of citizens of RI, "he said.

Zainuddin continued, after the people on the border served, was very beneficial to the citizens there. They can also perform banking transactions such as sending or receiving money from their distant relatives in Jakarta, Sulawesi, or other areas. (*)